CNS Tap Test is an adaptation of the Finger Tap Test (FTT) or Finger Oscillation Test (FOT) which  is used  to measure the status of the central nervous system (CNS), and is one of the most commonly used tests in neuropsychology, because of its simplicity and reliability, and because it generates relevant data about fine motor control, which is based on motor speed as well as kinesthetic and visual-motor ability.

“Soviet coaches have known for decades that the condition of the athlete’s nervous system is the most important variable in posting an elite performance and breakthrough neuroscience research by their fellow countrymen had given them an undeniable advantage over the rest of the world. Simple and effective tests of the CNS tonus were developed: the grip, the standing vertical jump, the critical blinking frequency, the latent reaction time, tapping with a pencil and hitting a maximal number of dots in 5sec, etc.”

Both hands should be tested on a regular basis in a consistent environment, typically every morning on waking. The procedure for testing is:

Multiple samples can be saved per day.

The resulting data can be graphed, emailed or managed from within CNS Tap Test. 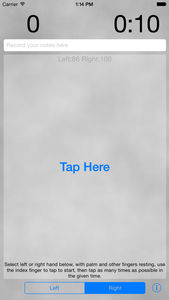 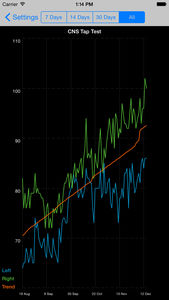 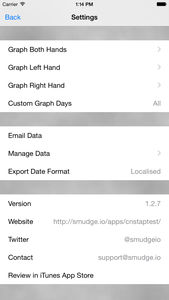 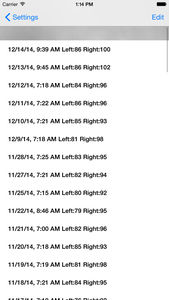 […] I though it might be of interest to some people who are training. The website about the app is here. Tweet This entry was posted in Uncategorized. Bookmark the permalink. ← Early Season […]

[…] movement speed and accuracy. There are various ways to test this, but one I have been using is the CNS tap test app. It will measure both hands and show a graph of your results over […]

[…] are several finger tapping test apps out there but the CNS Tap Test by smudge.io is free, works quite well and is available for both Android and iOS. Here’s a […]

[…] and honesty from the athlete/client.  A more practical and objective measure is the CNS Tap test (http://smudge.io/apps/cnstaptest/), which you can get as an app for iOS and android (although practice effect and awareness may skew […]

[…] built apps for this that measure each hand and then graph it for you overtime. I just started using this one on my phone. Give it a try and let me know what you […]

[…] and there are a couple of apps out there for IOS and Android that you can download, I prefer this one. The nerves in your hands show great sensitivity to neural tone and require fine motor control, […]