I had hosted a website with Westhost on a shared server for a while, and hadn’t had a whole lot of problems with it, other than some limitations around the maximum number of connections allowed on the shared hosting platform. When I had the requirement to bring another website online as a backend to an iPhone app, I went for the base Cloud Hosting package choosing the Reseller option to allow SSH access. Through my own incompetence I managed to sign up for 12 months in advance, rather than by paying on a monthly or quarterly basis.

Unfortunately I have been afflicted by more than one outage every month. The following are the outages as recorded by Site24x7.

I would like to point out these are all infrastructure failures, not bad code or misconfiguration on my part. I understand that outages are going to happen, but on at least two occasions I was unable to contact anyone via instant chat, or able to get any response by logging a call or via Twitter until well after the outage was over. My mail server at home had been up for two years straight before it was restarted during  a distribution upgrade, and I don’t have a SAS 70 Type II Compliant Data Centre.

After the last 3+ hour outage I decided enough was enough, and moved my websites to the Rackspace Cloud.

Not unreasonably, I now wanted a refund for the unused four months of hosting, and for the 3 months where the uptime was below 99.9%, as advertised on the Westhost home page: 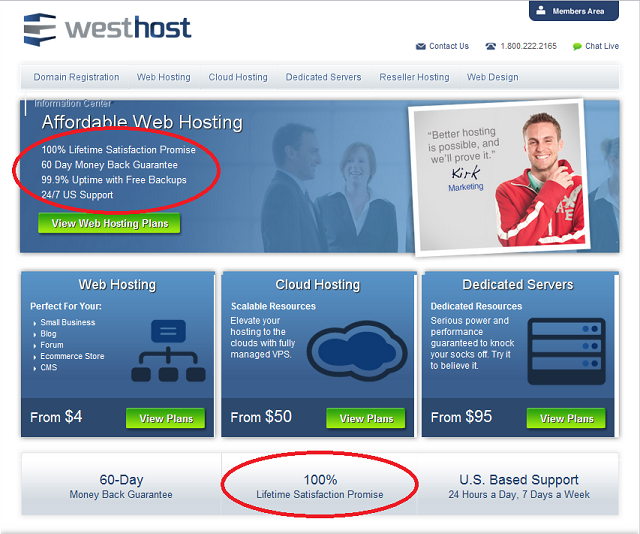 It seems only reasonable when you look at their 100% Lifetime Satisfaction Promise including:

And that is where the problem occurs…. According to Westhost Billing:

“In regards to your request, due to our Terms of Service we do not offer a uptime guarantee on our Cloud, Reseller or Shared hosting or unManaged server plans. We only offer an SLA (Service Level Agreementt) on our Dedicated Servers found at this link, http://www.westhost.com/policies/sla.html.”

Does this mean their 100% Lifetime Satisfaction Promise only applies to their Dedicated Servers?  To me, that is certainly not how they advertise it, and the confusion must reign internally as when I previously asked for a refund for an outage the response I got was not that it wasn’t applicable to my account but that:

“I am sorry that you have experienced those down times, unfortunately we will not be able to reimburse you because we calculate the up time from the beginning of the month to the end of the month so if those are the only two downtime’s for those months they occurred in separate months so would not have effected each other and each month would have had a up time of 99.9%.”

So having been informed that should I have 99.9% downtime in a month I would be due a refund, I laboured under the misapprehension that I would get a refund for the four months hosting I had paid for, but not used. Not so apparently:

“In regards to your cancellation for the cloud service no refunds are offered when service is closed in the middle of the hosting period.”

I’m not saying that if you break out Lawyers at ten paces, they don’t have a legal, contractual case for the above refusal to refund for service not delivered, but I believe it is well outside of the spirit of the 100% Lifetime Satisfaction Promise and the message conveyed by their website.

So with a bitter taste in my mouth, I have had some early success with Rackspace:

UPDATE: Within 24 hours WestHost had contacted me, and undertaken to give me a refund for the four months of hosting that I had not received. Within 5 days I had the refund in my PayPal account.
UPDATE: 24 August – Things not going so well over at WestHost. Rackspace 57 days, 100% uptime. 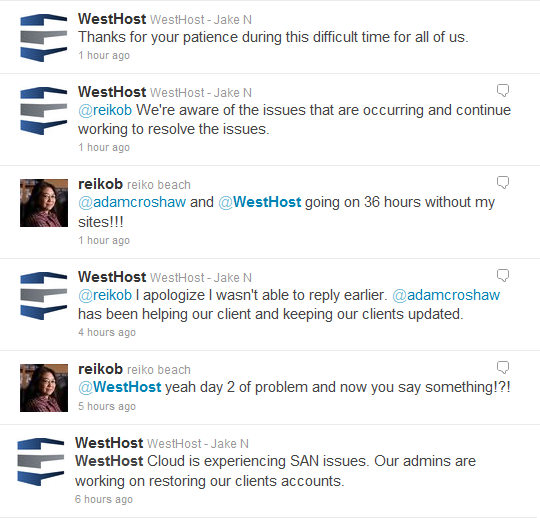